The Kingdom of Cod: Winter in Norway’s Lofoten Islands 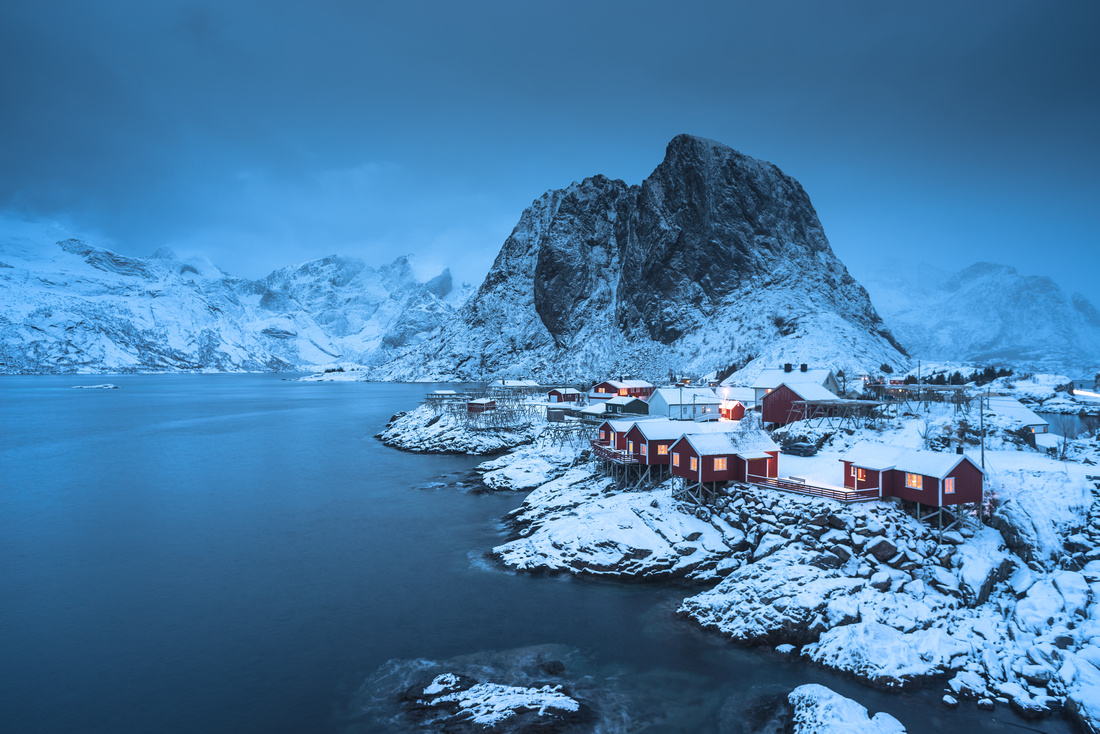 Hamnøy, Moskenes after sunsetBlue hour at the fishing village of Hamnøy on Moskenes island in Lofoten

The coccyx-shaped Lofoten archipelago defiantly juts out into the frigid waters of the Norwegian Sea. Situated north of the Arctic Circle, winter in this chain of mountainous islands rising straight out of the roiling ocean like an impenetrable wall of rock is utterly spellbinding, an otherworldly wonderland of frosted glass etched against constantly changing skies that range from steel-grey to candy-pink.

Comprised of a multitude of various sized islands, according to Norse legend the Lofoten archipelago was created by the hammer-wielding god Thor, who flung fistfuls of rocks into the sea. The population of 24,500 is concentrated on four main islands running from Austvågøy in the north through Vestvågøy and Flakstadøya to Moskenesøya in the south. The E10 highway now links these four islands via a series of bridges and sea tunnels.

We fly into Kiruna in neighbouring Sweden where a 4X4 vehicle hire is half the price of that in Norway, and where we are able to avail of much cheaper provisions for our week’s self-catering stay in Lofoten. A six hour drive brings us to our first accommodation at Lyngværet in Austvågøy, a cosy and beautifully furnished wooden cabin above the island’s rocky shoreline. After a three night stay we drive south to Moskenesøya and the fishing village of Å (pronounced ‘aw’ which means ‘rivulet’ in Old Norse), a cluster of rust-red and ochre-yellow houses overlooked by a formidable range of snow-frosted mountains, a film-maker’s dream. Here we settle into a rustically furnished traditional fisherman’s cabin jutting right out over the cellophane-clear water in the harbour. 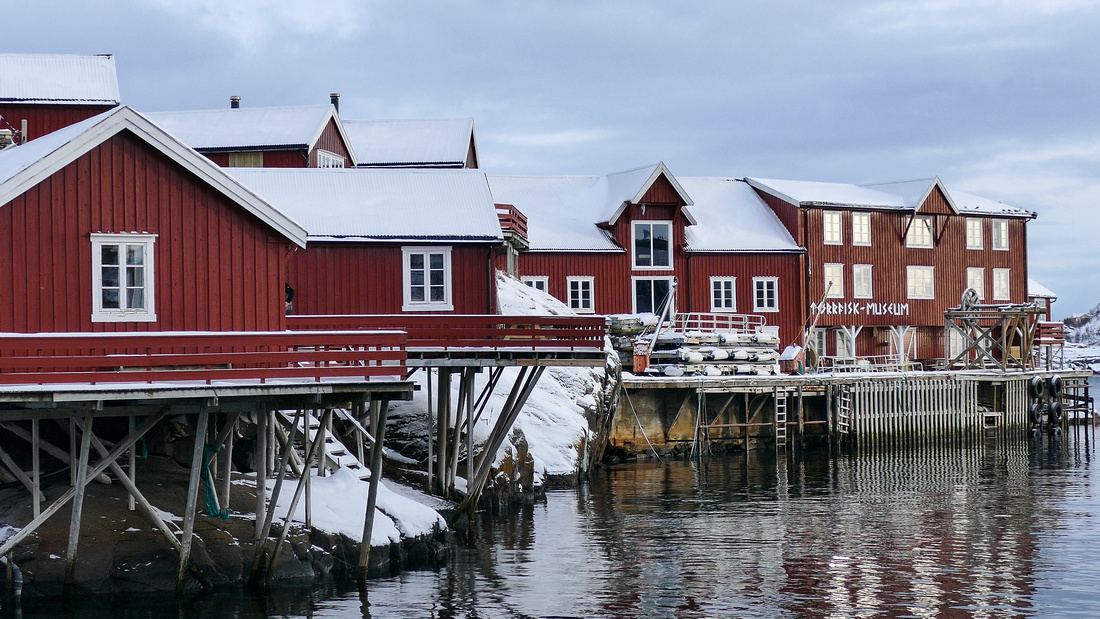 Everywhere the raw salt-laden air is pungent with the unmistakable stench of fish which constantly assaults the nostrils. Lofoten is the world’s largest cod fishery. For centuries fishermen from near and far have converged on these islands in midwinter, chasing great shoals of skrei (Arctic cod in their prime) that have migrated south from the Barents Sea to spawn. Cod has long been the lifeblood of this archipelago, and the ubiquitous rust-red rorbuer - wooden huts on spindly stilts projecting over the sea and connected by wooden walkways that were once the temporary homes of the migrant fishermen - are among the islands' most characteristic sights. Formerly painted with a mixture of fish blood and cod-liver oil and sporting grass roofs, many, including those we stayed in, have now been converted into tourist accommodation. For the fishing industry has witnessed a drastic decline from its zenith at the turn of the twentieth century. In those days something like 25,000 fishermen would descend on the Lofotens from late-January for the three month cod-fishing season.

However, despite this decline, the islanders remain firmly wedded to the fishing industry and as ubiquitous as the rorbuer are the enormous wooden drying frames (hjell) that seem to occupy every windswept rock. These are used to produce stockfish, cod that have been decapitated, gutted, split along the spine and hung over poles by their tails to dry in the salty Arctic air from February to May, when cold weather conditions protect the fish from insects and prevents uncontrolled bacterial growth. After this, it is removed from the hjell to be matured for another two to three months indoors in a dry and airy environment until it is around a fifth of its original weight. Losing none of its nutritional value in the drying process, the Lent-friendly stockfish is much-prized, particularly in the Catholic countries of southern Europe, and also in Nigeria where demand has risen sharply and in 2014 eclipsed exports to Italy. 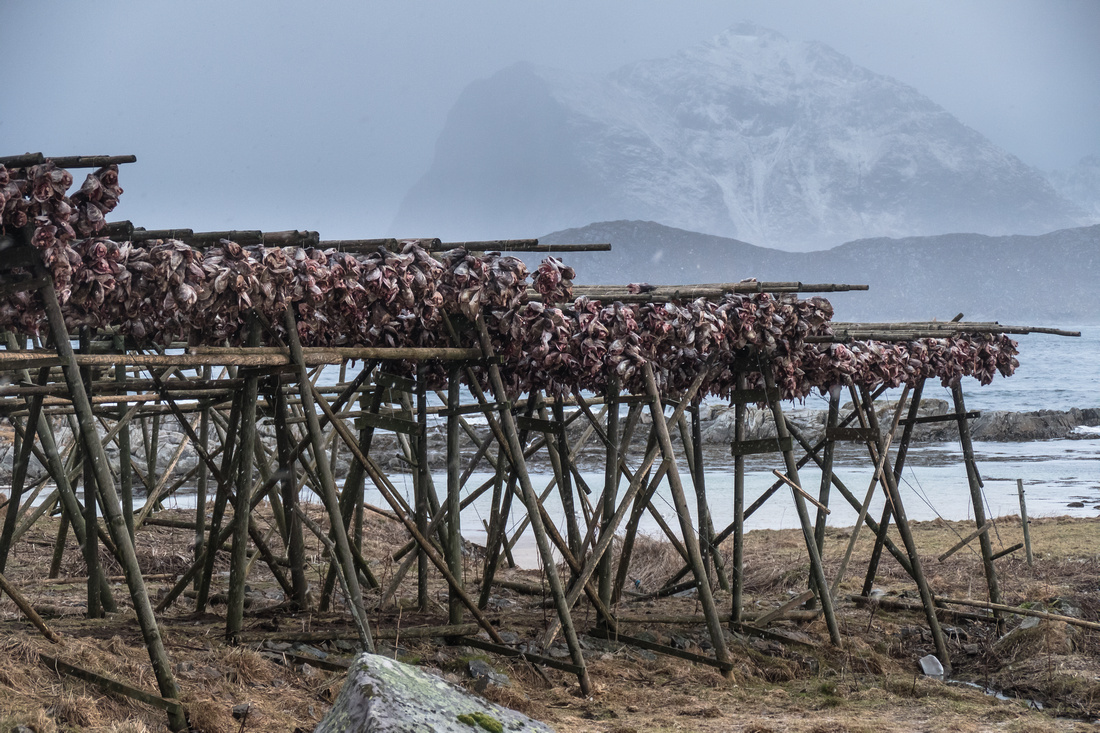 A more macabre sight are the racks of severed cod heads bound for the West African market. Their mouths wide open as if gasping for their last breath reveal grisly rows of razor sharp teeth but no tongues - these are a local delicacy and have been cut out. Strung together in snow-dusted bundles, their swim-bladders hang down like limp balloons from beneath blackened gills, while overhead cawing crows and wailing seagulls wheel in the wind, awaiting their chance to swoop down to peck out their glazed and lifeless eyes. 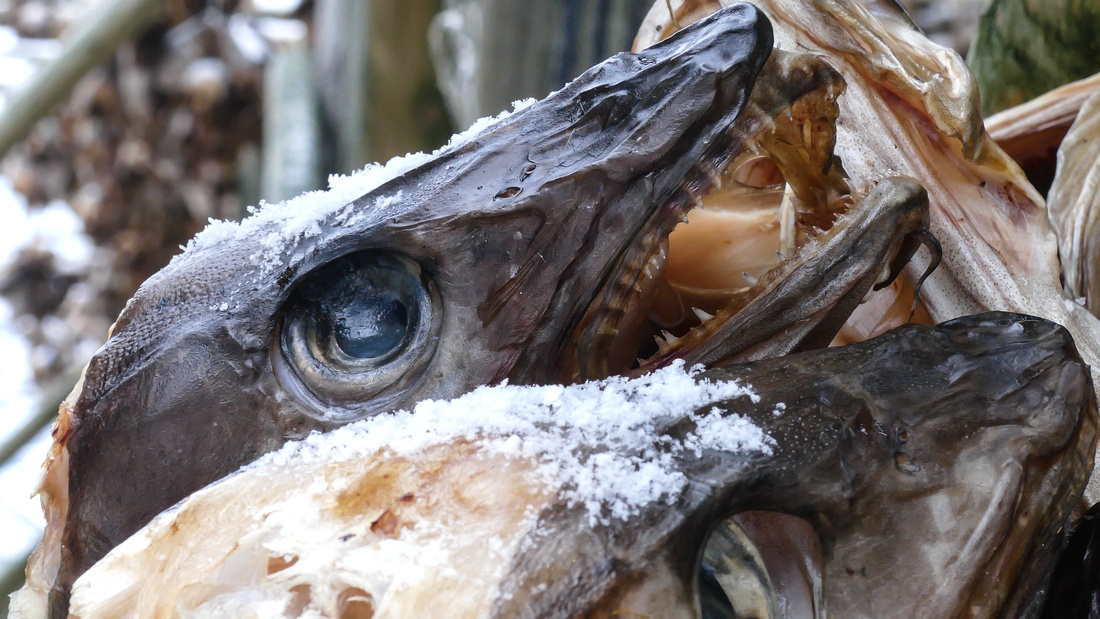 The Lofoten archipelago is also the centre of the country’s whaling industry. Norway is one of just three nations, along with Japan and Iceland, that continue to hunt whales against the tide of public opinion. Setting aside the opprobrium of those who wish to see whaling banned, we dine out at the upmarket Paleo Arctic restaurant in Svolvær which draws inspiration from a time when we lived as hunters and gatherers. Here we feast upon smoked fin whale with a soft poached egg, organic sour cream and Norwegian crisp bread. This is followed by a succulent grilled fillet of wild reindeer with mushrooms, mountain cranberry, pickled raisins and seasonal root vegetables, rounded off with a divinely spiced panna cotta and washed down with a hearty Rioja. The food didn’t stick in my croup, but the bill most certainly did!

The weather at this latitude is mercurial and unpredictable and can change in an instance; our mid-February photography trip unhappily coincides with a period of bitterly cold unsettled weather. For days on end a cruel Arctic wind howls through the narrow streets of the fiskevær (fishing villages) and lifts great columns of whirling spindrift that tear malevolently across the frigid landscape. The mercury plummets to sub-zero temperatures draining every last vestige of warmth from our bodies, the blinding spindrift blasts our faces which sting with the eviscerating cold and our fingers are too numb and frozen to operate a camera. On such days a shot of Linie, the famous Norwegian aquavit matured at sea in oak sherry casks, is a very welcome antidote against the deep-freezer climate. 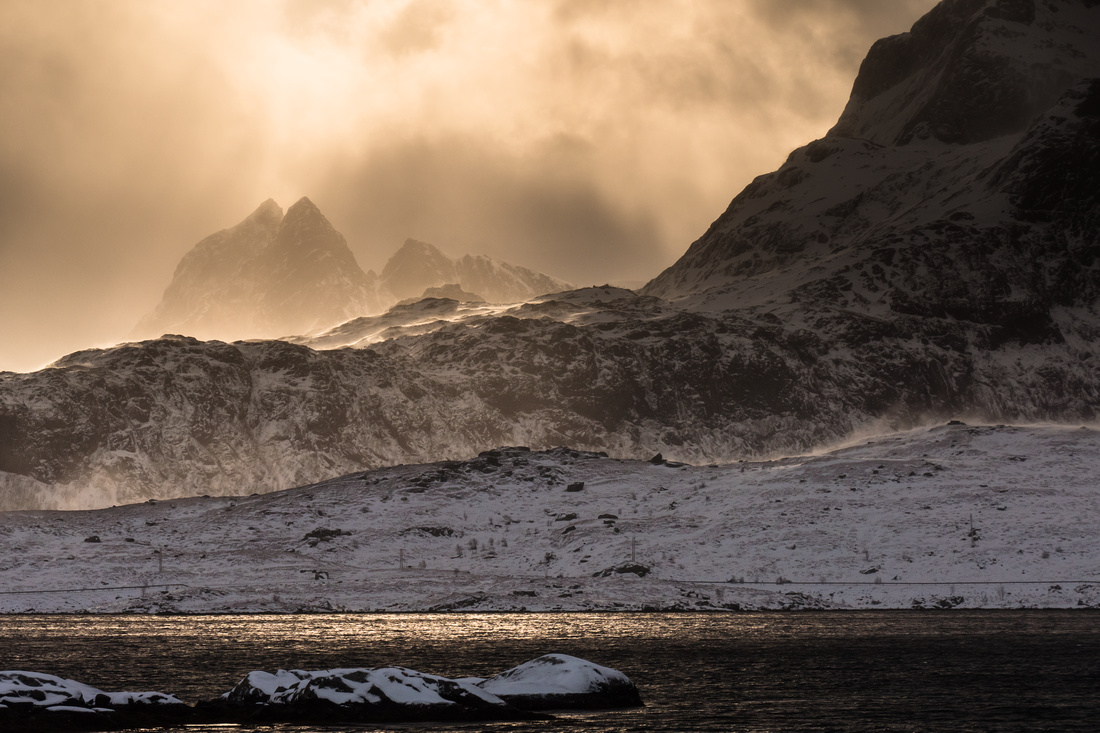 The grey-green sea seethes, the pounding surf slams onto ice encrusted shorelines and waves lash against the stilted rorbuer that are somehow anchored firmly enough to shelves of rock to resist the relentless onslaught of the ocean. As I watch a brightly lit fishing boat making for shore near Reine at dusk, I think of the fishermen of yore heading back through storm-tossed waters to land their catch, drawn ashore by the welcoming warm glow of candlelight from the windows of these rorbuer in the fiskevær dotting the coast. Many did not make it, and every fishing community has its share of tragic stories of men pitched to a watery grave by the merciless sea. 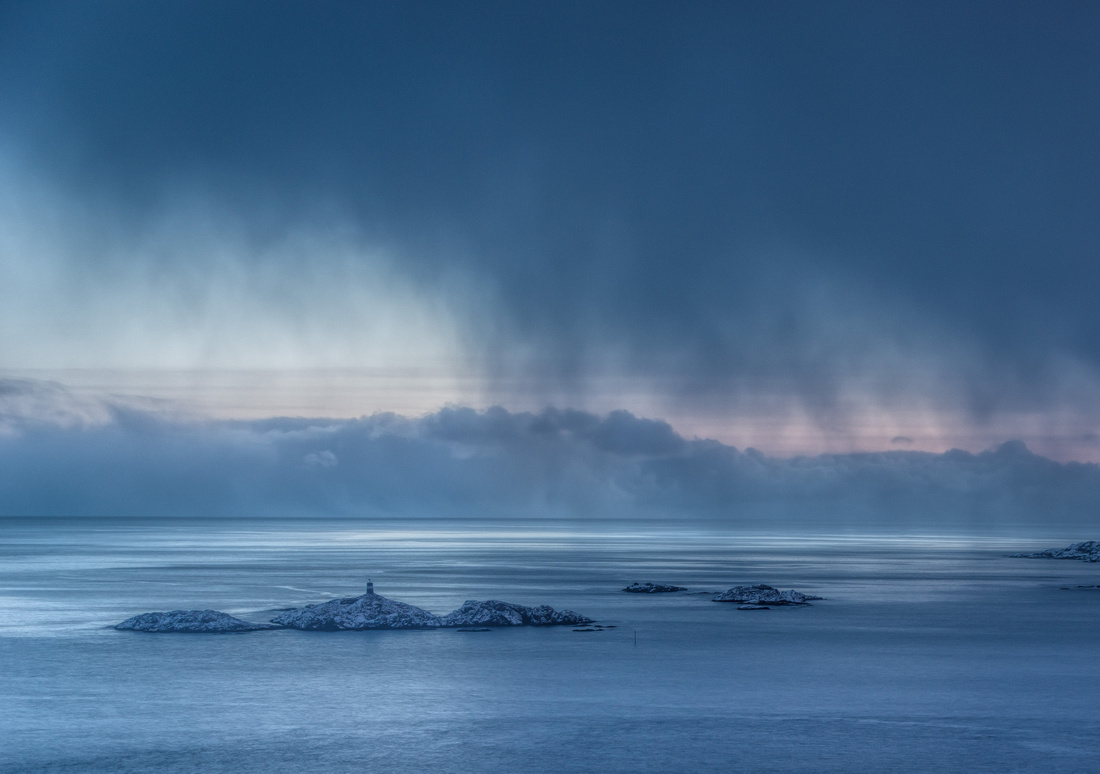 EventideAnother snow storm sweeps in from the Arctic Ocean towards Reine

Indeed, American novelist Edgar Allan Poe’s short story, A Descent into the Maelström, tells the story of a man who survived his ship being drawn into and swallowed by the Moskstraumen, a system of tidal eddies and whirlpools between Lofoten Point on Moskenesøya and the islet of Mosken. The words of William Whiting’s hymn, Eternal Father, Strong to Save, could have been written for the folk of Lofoten who, for centuries cut off from the mainland and surrounded by the sea, were forced by necessity to place their fate in the hands of the elements:

‘Oh, hear us when we cry to Thee,
For those in peril on the sea!’

For hours at a time heavy falls of snow blow by the windows of our hut in a horizontal blur. The thick flakes quickly bank up against the door and gather in the corners of the window frames, shrouding the surrounding landscape in an even blanket of pillow-soft whiteness. There is something mesmerising and deeply relaxing about watching the falling snow from the comfort of a cabin warmed by a wood burning stove, and time appears to stand still. The lacerating and whining winds eventually blow themselves out, leaving a profound but temporary stillness until the next weather front sweeps in. The great cloak of whey-white snow seems to muffle most sound save the constant shrieking of the seabirds. As we sally forth into this white wonderland, the crunch and squeal of the freshly fallen powdery flakes beneath my boots is deeply gratifying and the creation of pristine boot prints seems to bring out the inner child in me!

Between these squally weather fronts the sun appears fleetingly, at times a match-head blazing white hot and amber, splitting the flint-grey sky into patches of speedwell-blue interrupted by billowing cloud in shades of pale-apricot, smoke-yellow and chalky-mauve; minutes later it is a wan disc floating in an immense misty greyness like a Chinese lantern. And all the while the monochrome landscape exudes a pearly-grey opalescence and seems to gleam with surreal lucidity against these extraordinary kaleidoscopic skies. 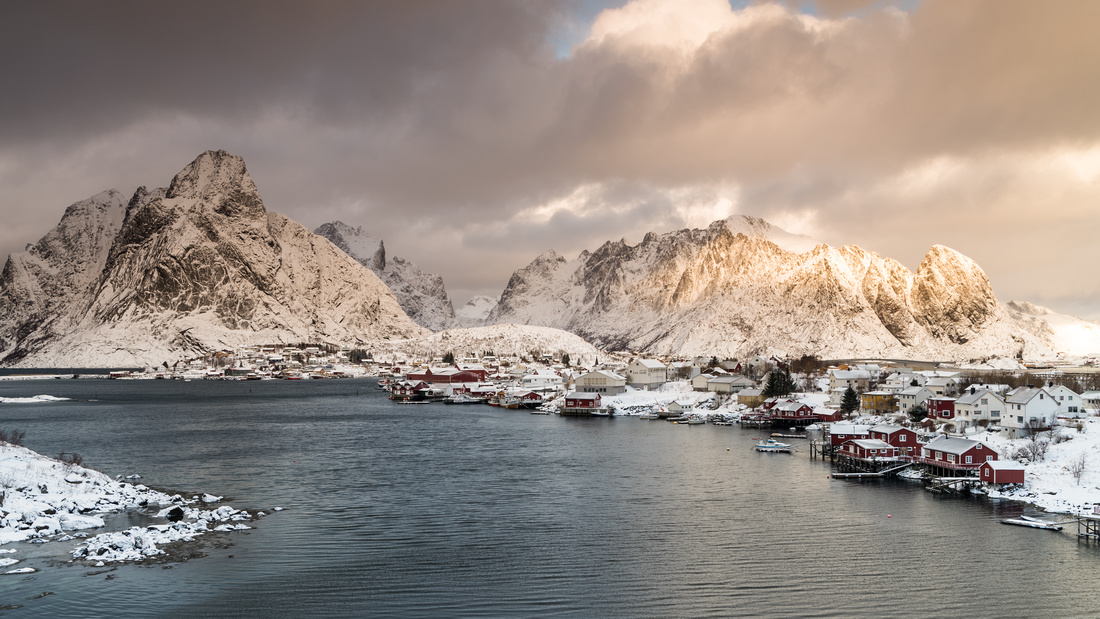 In the feeble sunlight the reflections of the rorbuer and the mountains appear to float and shimmer with a mirage-like quality in the becalmed waters of numerous inlets; the snow glitters in the low sun angle as if it was pulverised diamond dust and glistening icicles drip like candle wax from the eaves of the huts. 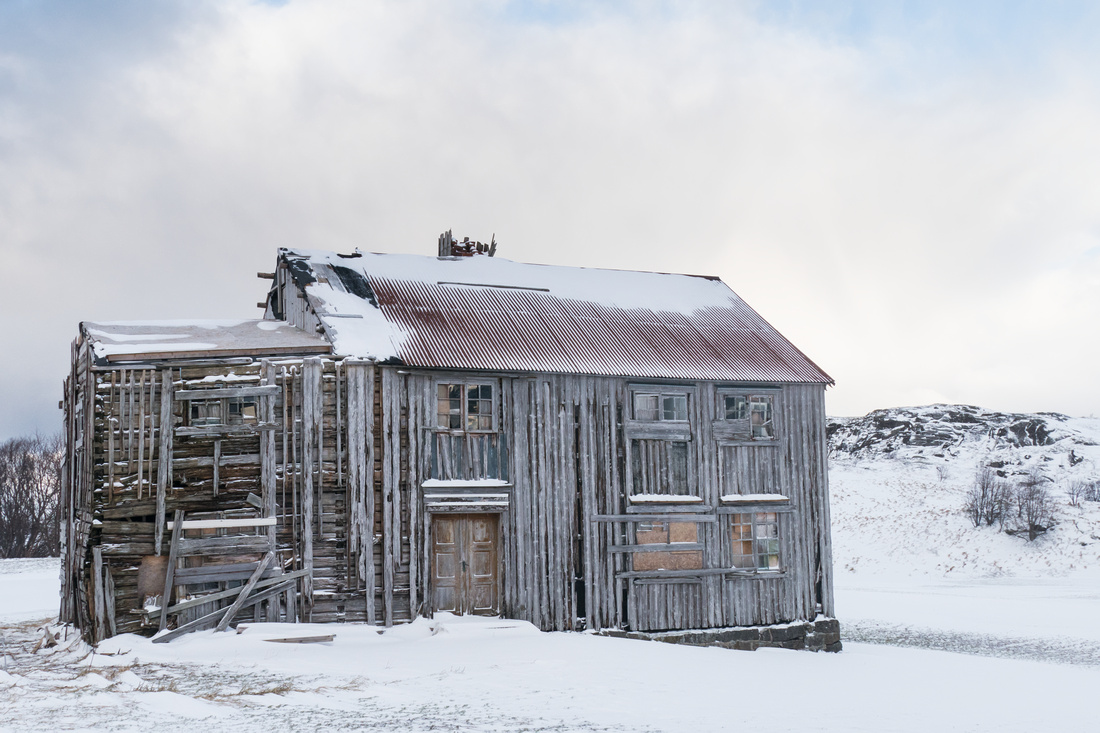 The blackened naked boughs of the birch groan under the weight of their newly acquired white finery, while conifers look as if they have been lifted straight from the pages of a Hans Christian Andersen fairy story. Then there are truly enchanting evenings when the sky is tinged with a candy pink blush which announces the settling sun. 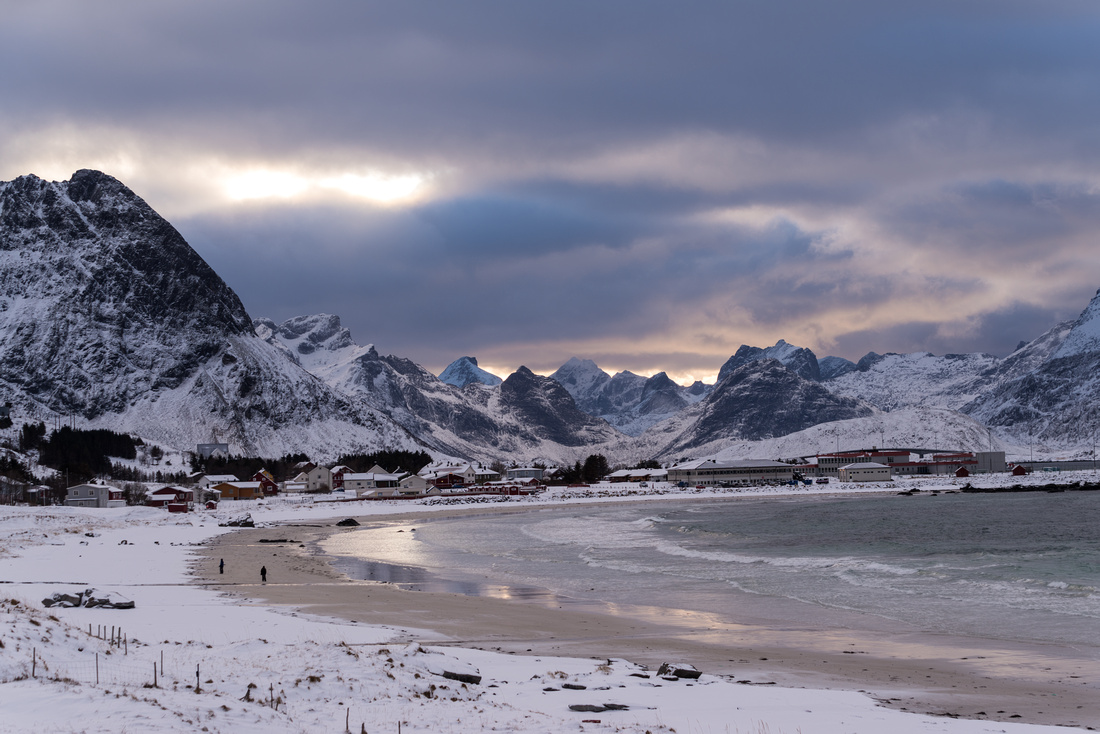 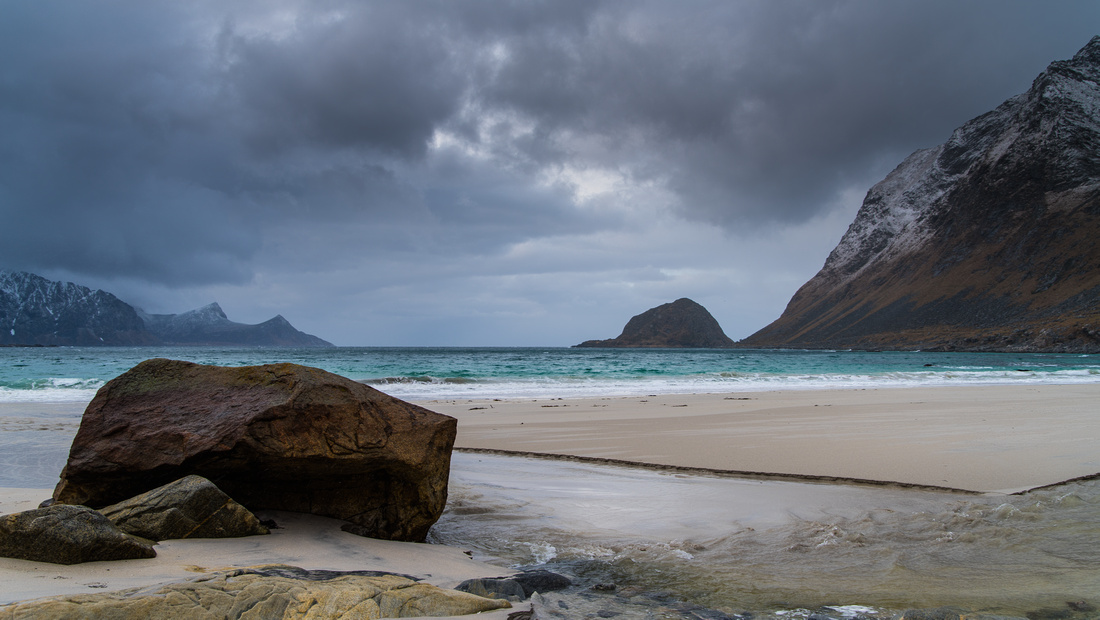 Even on the dullest day, the near-shore has an aquamarine hue which fades into bottle-green which then gives way to the petrol-blue yonder of the deep sea speckled with white horses, all of which serve to enhance the deep gold of picture-postcard perfect sandy beaches. In the blue hour, the chilled lavender landscape contrasts with the warm amber rectangles of light emanating from the windows of the rorbuer, and the settlements hemmed in between mountain and sea resemble a string of fairy lights which are reflected in the inky-blue water. 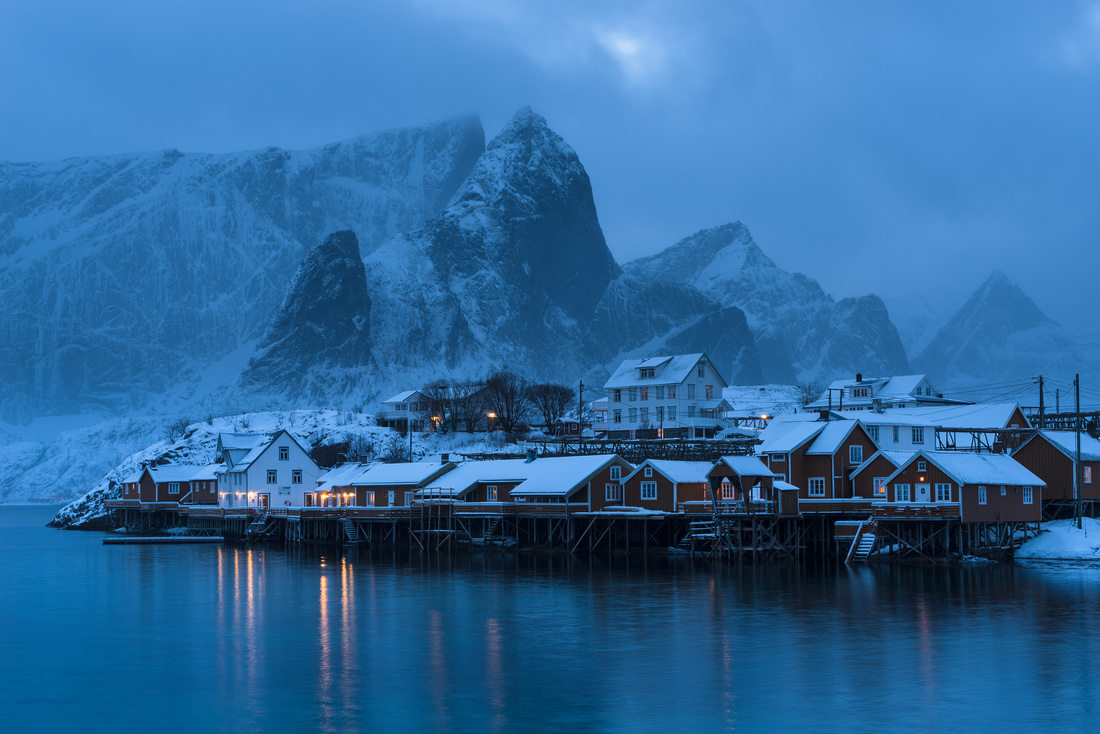 These brief interludes between the storms are rewarded with dramatic views of mountains of the kind only young children draw – spiky, sky-piercing, majestic - and attract scores of other photographers all jostling for space, as eager as we are to commit these breathtaking vistas to film. Unfortunately, the constantly cloudy skies mean that we are not treated to the celestial light show of the Aurora Borealis which is undoubtedly the main draw to this northern region in winter for many photographers. 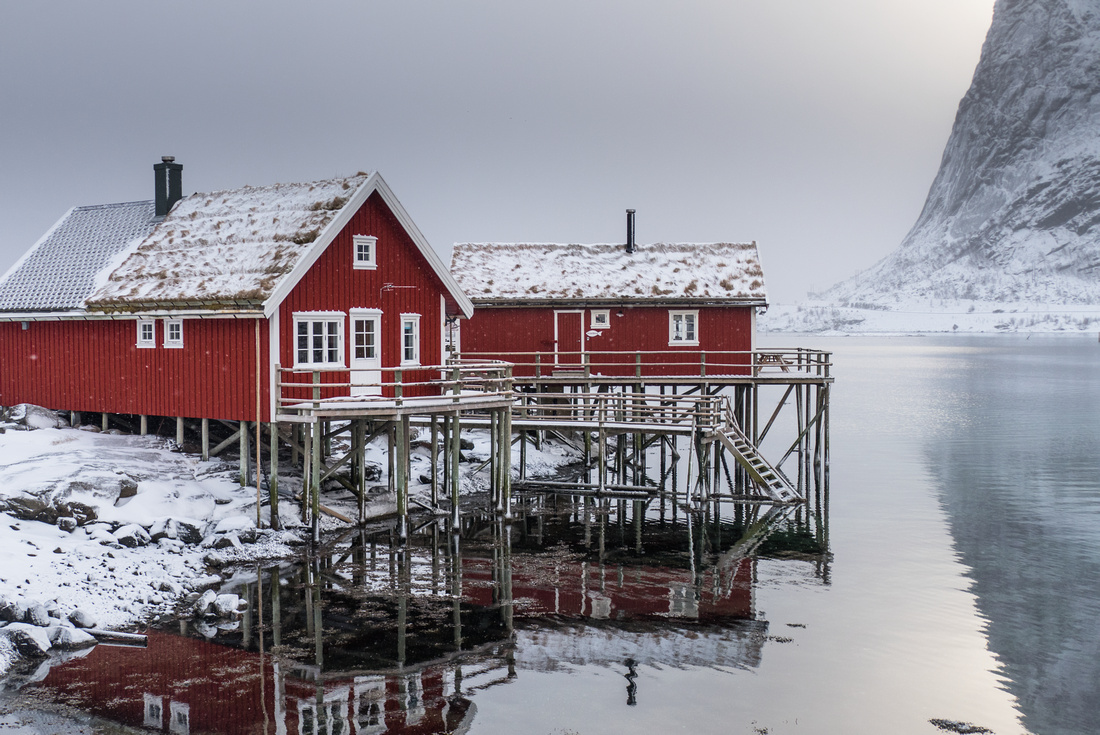 Our stay in Lofoten has been a mere prelude, the place has permeated my very soul. As we drive away from our final photo stop in the heritage-listed Nusfjord fishing village, we are already imagining an autumn return, when the mountains will have cast off their snowy apparel opening up a whole new world of walking, trekking and photo opportunities amid the unparalleled beauty and splendour of this, The Kingdom of Cod.