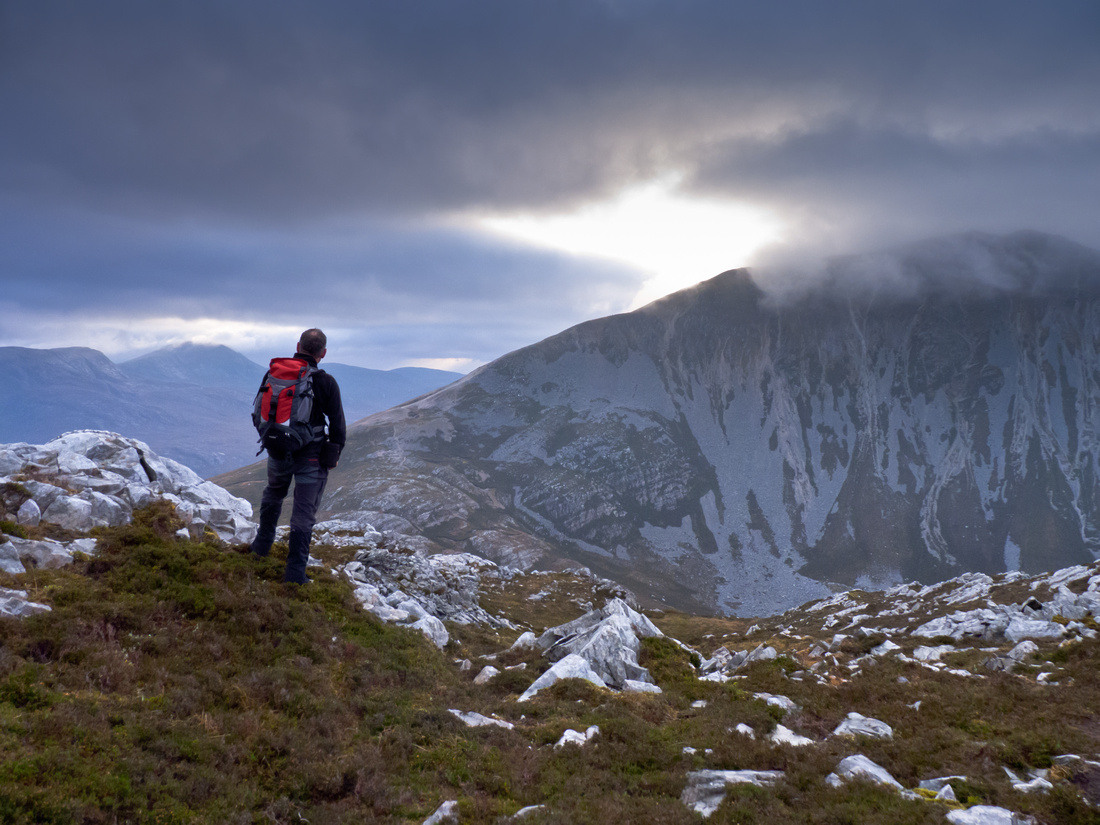 Errigal from MackoghtCloud drifts up over the NE face of Errigal, Donegal's highest peak, as seen from the nearby summit of Mackoght

Donegal is a magical corner of northwest Ireland: remote, not on the way to anywhere, a land of wide open spaces and big skies. Brian Friel's Donegal, a place of jagged coastline, treacherous cliffs and unspoiled Blue Flag beaches along the dramatic Wild Atlantic Way, with a remote hinterland of shimmering loughs and great tracts of boggy wilderness hemmed in by mountains. Its primitive charm and wildness have also spawned some of Ireland’s finest musicians. Their languid, ethereal tunes, many sung in the haunting cadence of Gaelic, conjure up images of this timeless land. You don’t just ‘see’ Donegal, you ‘feel’ it.

We set out from Dún Lúiche (Dunlewey) mid-afternoon on a chilly November day to climb Mackoght and its big brother, the steep quartize giant, Errigal, the highest summit in County Donegal. The air is cold and crisp atop Mackoght and great pillars of mist periodically drift up over the shattered scree-covered northeastern face of Errigal which looks virtually unassailable from this angle. Joining the well-trodden tourist path we quickly attain the summit of Donegal's most iconic mountain to feast our eyes upon sublime 360 degree views. The setting sun casts a glorious pool of rose-tinted light upon the scalloped face of nearby Aghla More, and the loughs of Dunlewey and Nacung blush pink. The sweet heady scent of the bog seems to be amplified in the dewy dusk, and as we descend the full moon rises and stars begin to wink in the firmament. The moonlight reflects off scores of bog pools which resemble shattered shards of a giant’s mirror and it’s so bright it is possible to see without head torches. 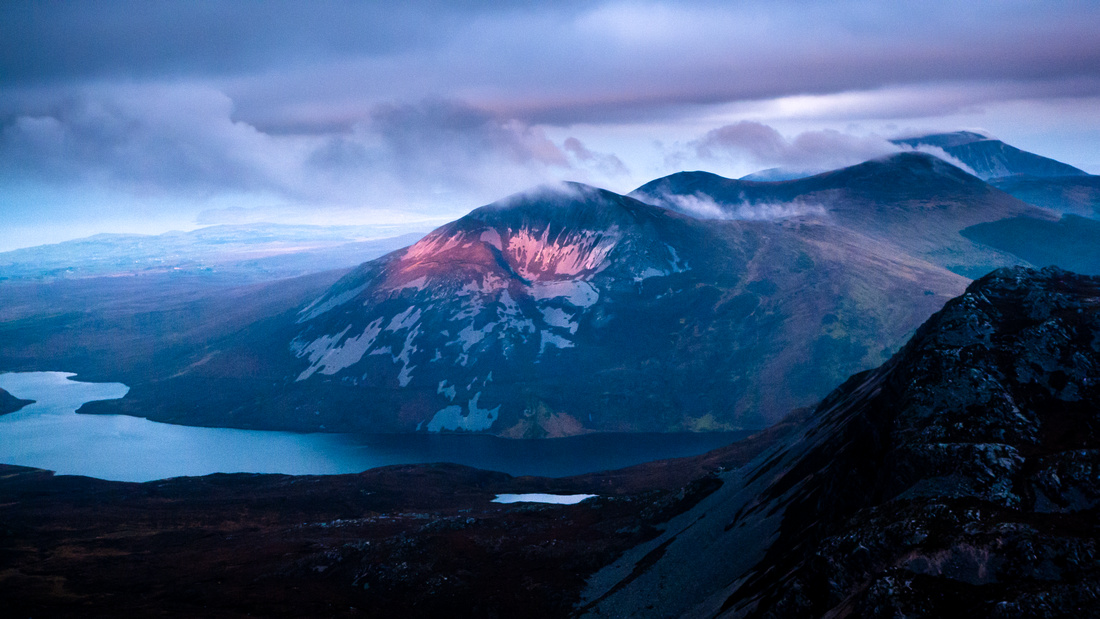 After booking in at the excellent An Óige-run Errigal Hostel in Dunlewey, we head for Tábhairne Leo (Leo’s Tavern) at Gweedore in the Donegal Gaeltacht, which is renowned for nurturing world famous musical talents Enya, Clannad and Moya Brennan. To begin with the place is virtually dead and we sit awkwardly nursing our pints of Guinness in a near empty room. But come late-evening the clientele begin to arrive in droves, an amazingly colourful collection of people often found in littoral societies which always seem to harbour colonies of 'bohemian types' who find that there is nowhere left to run so just settle down. A tall man with a face like a nutcracker, whom a very gossipy local lady at our table duly informs me is Dutch, wears apparel like that of a Puritan preacher complete with broad rimmed black hat. A gregarious middle aged lady sporting peacock feathers in her 1920’s hairdo cruises the bar area wine glass in hand:  'She's from Dublin fo-er', my table mate informs me with a knowing nod and wink. It’s hard to be heard above the animated conversations in both Irish and English.

The place is packed to the rafters as the musicians strike up sometime after ten o’clock, the rhythmic beat of the bodhrán contrasting with the plaintive, mellow notes of the flute. ‘Níl sé ina lá’ sing the band, ‘níl sé ina lá is ní bheidh go maidin’, as my mind, now hazy from the Guinness, begins to wander. ‘De ye know ‘Tuoer-kee?’ enquires another local woman at our table who had told me her entire life story in fifteen minutes and managed to obtain a good deal of mine! Smiling vacantly, I wonder what on earth ‘Tur-key’ has to do with me being from Cornwall... the Guinness begins to flow more freely. Knowing we won’t be able to 'drink here 'til the morning' as in the lyrics of Níl sé ina lá, and like many of the locals undoubtedly can and will, we quietly make our escape during the distraction of the draw of a raffle in aid of Donegal Mountain Rescue and arrive back at the hostel way past midnight.

The land steams as the morning sun gently releases it from the icy grip of the night. There’s something about the quality of the light in Donegal - a translucence that enlivens the russet heather, green mosses and warm bands of coloured rock in the cliffs of Slieve League which contrasts with the deep blue of the sea and sky. These enormous cliffs, truncated by ice and ocean and exposed and polished by the storms of countless ages are stupendous, three times the height of the more well-known Cliffs of Moher in County Clare. These are among the highest sea cliffs in Europe and the sea is so far below the waves appear silent. 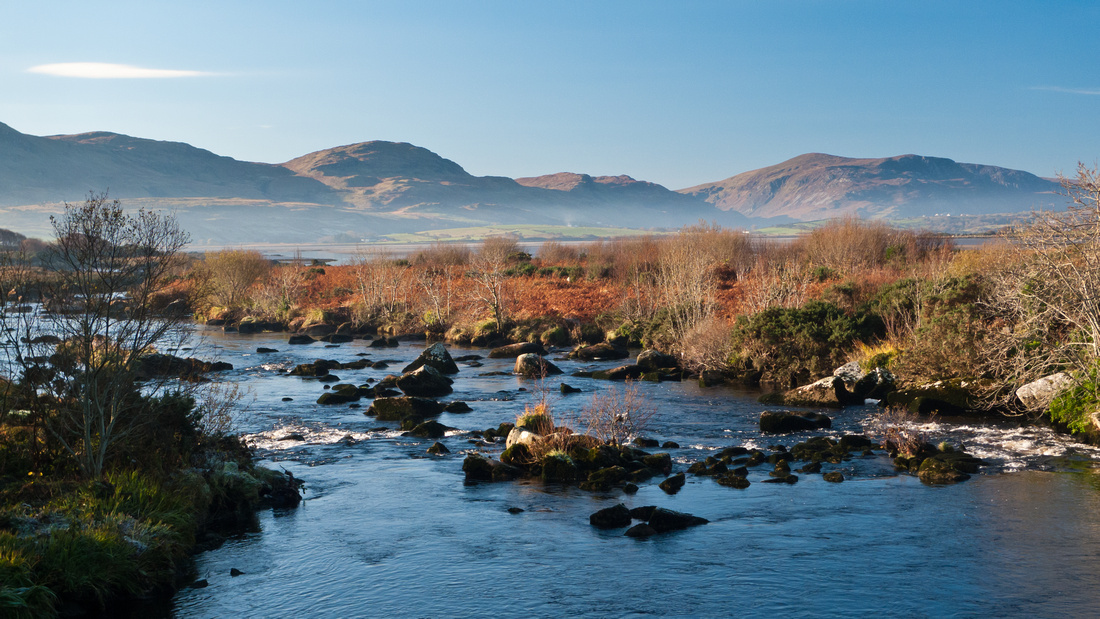 On a perfectly still and sunny autumn afternoon we take the cliff path, scrambling the ragged, razor-back rise including the infamous airy arête at Kerringear and One Man’s Pass, to the highest point. The immense vista leading to the horizon is jaw-dropping. The speedwell-blue sky strewn with wispy-white cloud merges effortlessly with the gleaming liquid blanket of Atlantic silver. Far out to sea streamers of tapered light splay out, flowing through cracks in the cloud which saturate the sea with gold. A solitary seagull soars out to the spot where sea and sky melt into each other and is lost from sight. In my mind’s eye I conjure up images of intrepid Medieval Irish monks setting forth into this liquid landscape in search of the Otherworld. In the distance are recognisable landmasses: Benbulben, Nephin, Achill Island and even distant Croagh Patrick. Inland a sea of mountain peaks recede in tumultuous waves as far as the rounded head of Slieve Snaght and the distinctive quartzite cone of Errigal, which we had assailed yesterday. We complete our circular walk via the Pilgrim’s Path to Bunglass as night falls and the moonlight shimmers over this enchanting and timeless landscape. 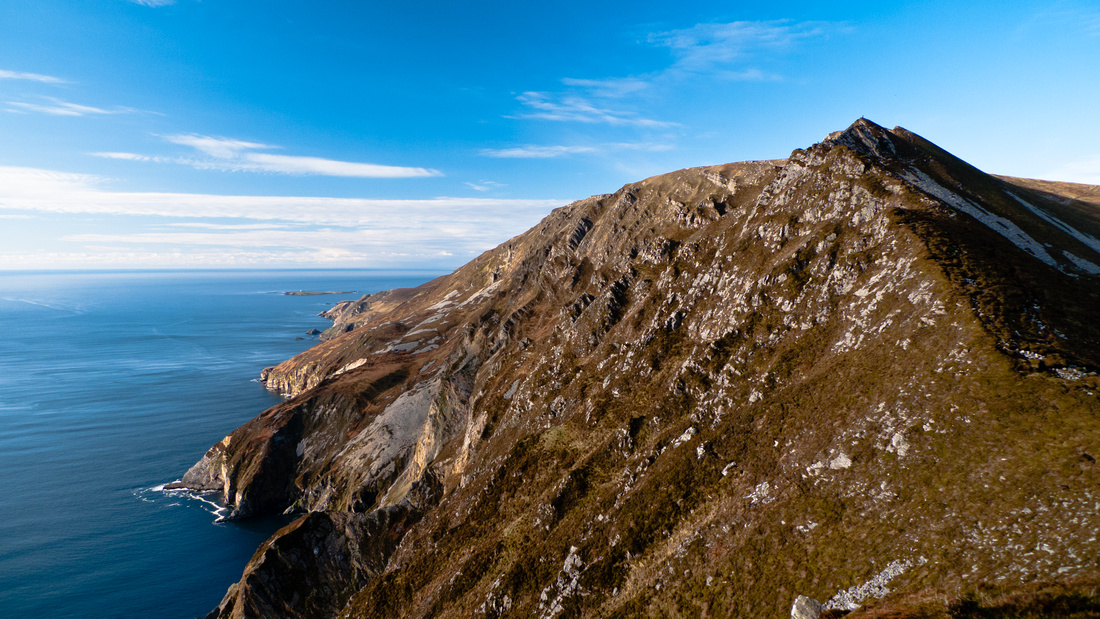 If solitude is what you’re after, Donegal’s your place. We’ve not met with a soul out on the cliffs and mountains during our two day stay, which only served to enhance the beauty and remoteness of this quiet corner of Ireland. Yet if you are seeking the company of locals and wish to immerse yourself in Donegal’s rich and vibrant culture, there are many traditional pubs and eateries where you will be warmly welcomed. Delectable Donegal does indeed have it all and after this, my first visit, I am eagerly planning my return… 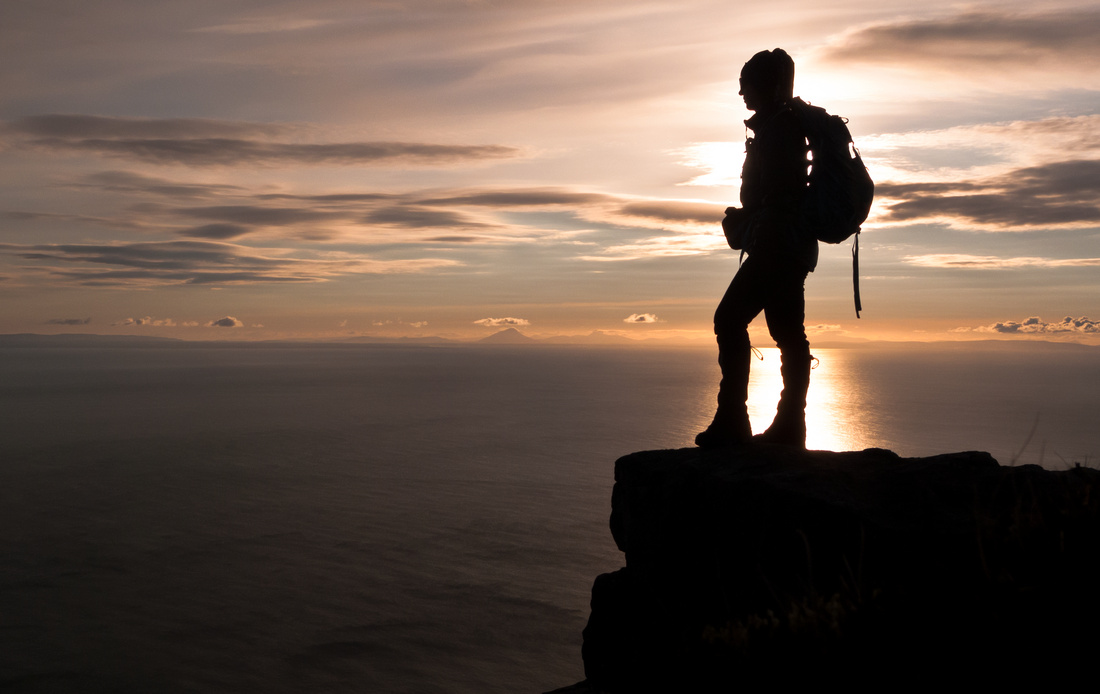 Croagh Patrick floats on the horizon as seen from Slieve League, DonegalStreamers of tapered light splay out, flowing through cracks in the cloud which saturate the sea with gold