Hiking to the Summit of Thabana Ntlenyana, Lesotho, ‘The Kingdom in the Sky’ 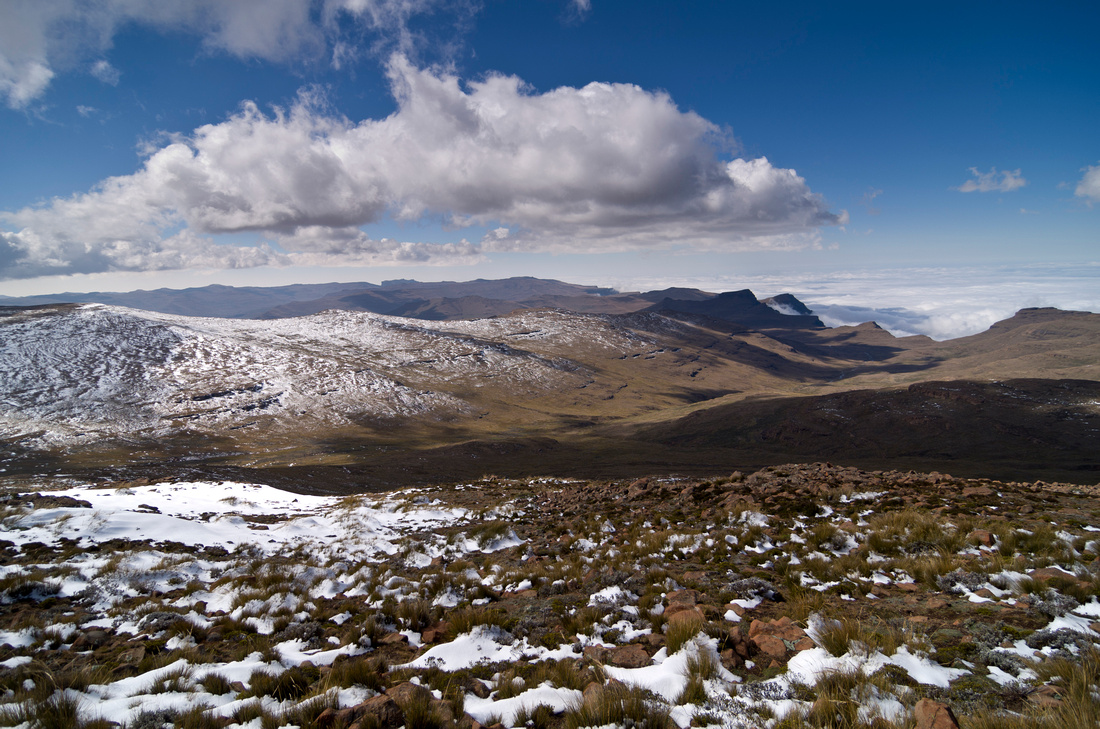 Quathlamba, ‘The Barrier of Spears’From the summit of Thabana Ntlenyana is an army of emerald peaks, most of which are over 3,000m

Sallying Forth up the Sani Pass...

Getting to the tiny landlocked Kingdom of Lesotho from KwaZulu-Natal in South Africa is no easy matter. It entails a drive up the infamous unpaved Sani Pass that snakes its rocky, tortuous way 1,330 metres in just eight kilometres up the edge of an escarpment in the Drankensburg Mountains. Named for the San people who once lived in the area, this former rough mule trail descends the Eastern Highlands of old Basutoland into Natal. It was used by drovers conveying wool and mohair on donkeys and mules to be exchanged for blankets, clothing and maize meal. Now it seems to be on every 4X4 masochist's bucket list. With features such as Suicide Bend, Oh My God Corner, and Haemorrhoid Hill, you need a strong anal nerve and a decent four wheeled drive vehicle to even attempt it.

Buckshot rain drums on our jeep as it lurches forward erratically through streams, bad potholes and over deep gullies scoured by floods. The sound of the loose rocks churning beneath the wheels really grates on my nerves. I’m hanging on for dear life, barely managing to stay in my seat during the violent and teeth chattering jolts, as the road throws the jeep this way then that. No wonder local people call this getting an 'African massage'! Mud and freezing temperatures make traction tricky on the numerous hairpin bends – at least we can’t see the horrendous death trap drop-offs in the billowing mist!

A couple of small taxi vans literally bulging with people hurtle down the road towards us at breakneck sped. One sweeps dangerously round a sharp bend and I screw my eyes shut as we stop rather abruptly. Descending traffic has right of way and I pray we won’t meet any more vehicles coming down. By now the adrenalin is really flowing and we aren't even half way up! Martin, brow furrowed in deep concentration, is gripping the steering wheel so tightly his knuckles turn white. We both know that there is nowhere to make a U-turn and the only way is up.

Close to the top we spot figures moving about in the freezing grey mist. Several vehicles are abandoned by the side of the road. One jeep is making a valiant effort to tow a stranded truck. We instantly slow, lose momentum, and shudder to a halt just before the penultimate hairpin. We can see that the road's surface right on the bend has been virtually obliterated by flash flooding, leaving an enormous gully which looks almost impossible to cross. We glance at each other in sheer desperation - the game is up. We must reverse back down the pass. The lunacy of doing this in thick mist then dawns on us; it might be easier to have a crack at the bend...

The engine roars and belches black fumes as Martin releases the handbrake. We hurtle forward nearly knocking over an onlooker in our determination to make that bend! We draw a round of applause from those proceeding upwards on foot as somehow, one of our tyres spinning, squealing and burning rubber, just manages to grip the frozen ground enough to provide sufficient traction to bridge the void and propel us forward. We are not able to resist a whoop of relief when we finally see the sign for the border post and a group of wretched rondavels lining the wet and muddy road looming through the cloud and billowing coal smoke.

The freezing cold hits us like a sledgehammer when we leave the jeep at the very top (2,873m). In a biting wind we make our way to a desultory galvanised shack with windows streaming in condensation. This is the passport office where we are duly admitted to Lesotho. I don’t think I’ve ever been as proud of a passport stamp as the one we receive here! After a celebratory photo with a group of Basotho youths who have made it on foot up the pass, we quickly make tracks to the famous 'Highest Pub in Africa' at the nearby Sani Pass Mountain Lodge to claim our liquid reward after such a nerve-wracking ordeal! 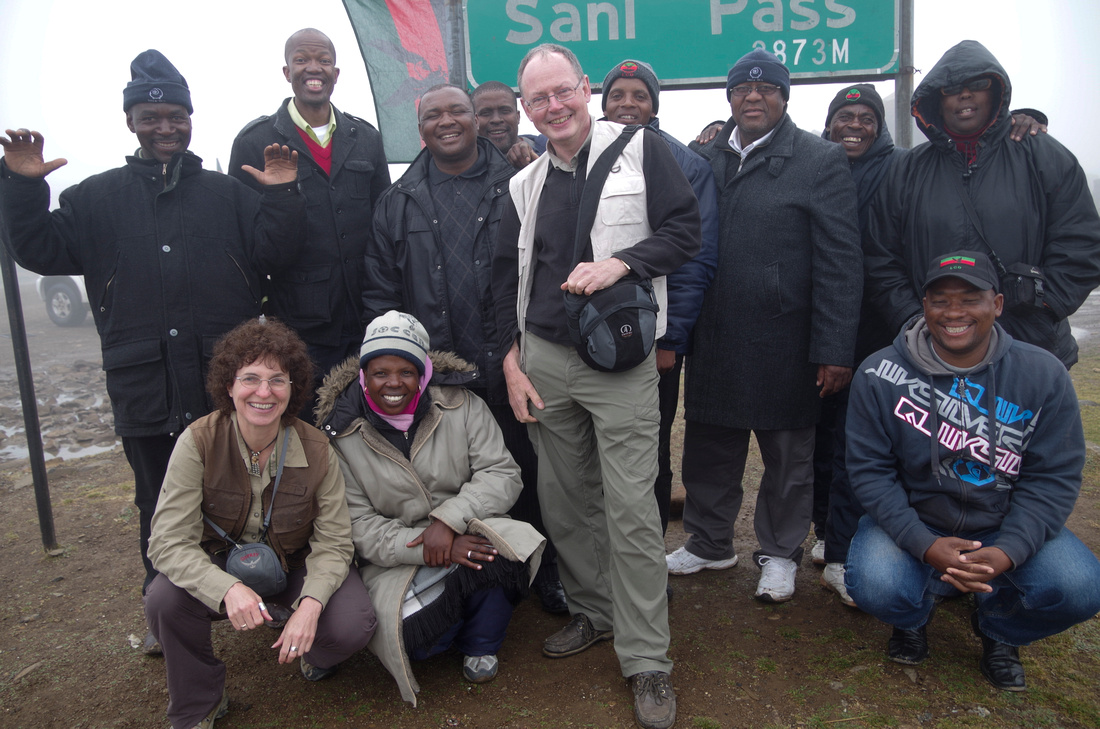 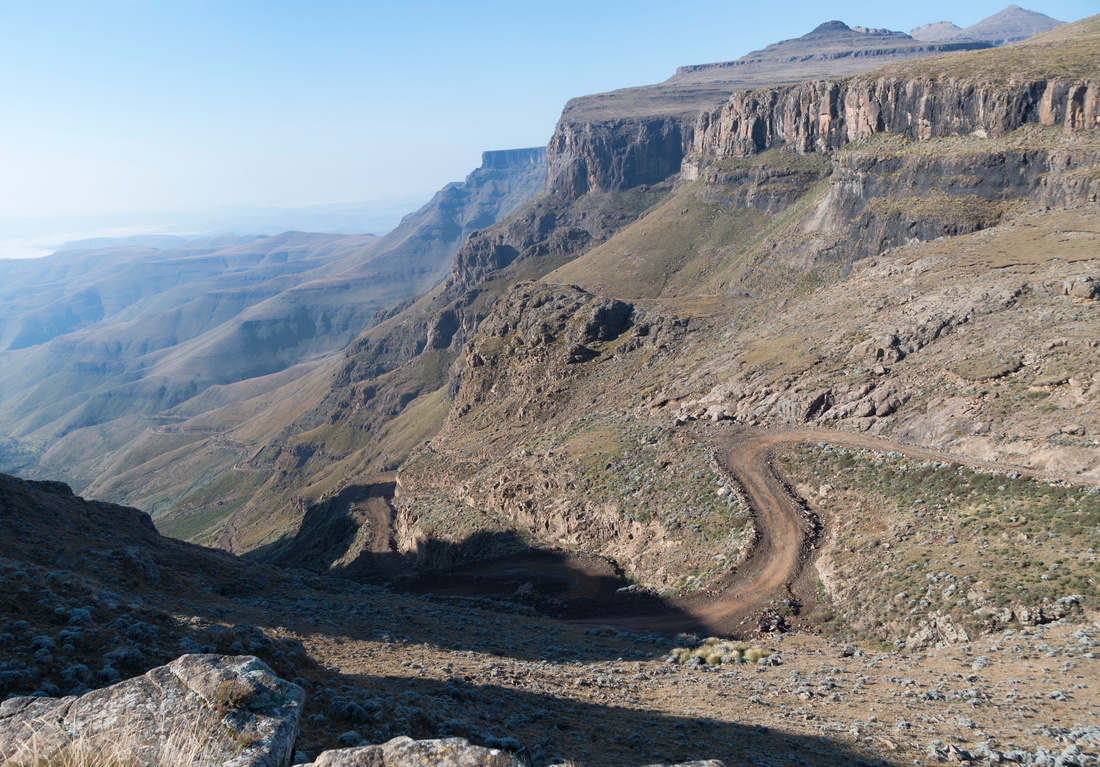 The infamous Sani PassThe dirt road up the Sani Pass traverses the side of the Drakensberg Escarpment and is on every 4X4 driver's bucket list!

Atop 'the Barrier of Spears'

The next day we awake to a crimson dawn. Last night was deep-freezer cold and the glistening earth steams as the sun gently releases it from night’s icy grasp. The ice-frosted roofs of the nearby cluster of thatched mokhoros (stone huts) are also thawing. They emit clouds of blue smoke as the first fires of the day are lit. As wood is scarce, local people dry the scrubby bushes that grow on the windswept highland and use them to start a fire. Dried cow dung then sustains the fire, and every homestead has a neat stack of cow pats outside. The mokhoros are built of thick layers of stone covered in dagga, a mixture of mud and cow dung, which is also used for flooring. All are built facing north to harness the sunlight and to avoid the vicious east-west winds. A fire is built in the centre of the hut and the heat radiating through the floor helps to keep them warm. 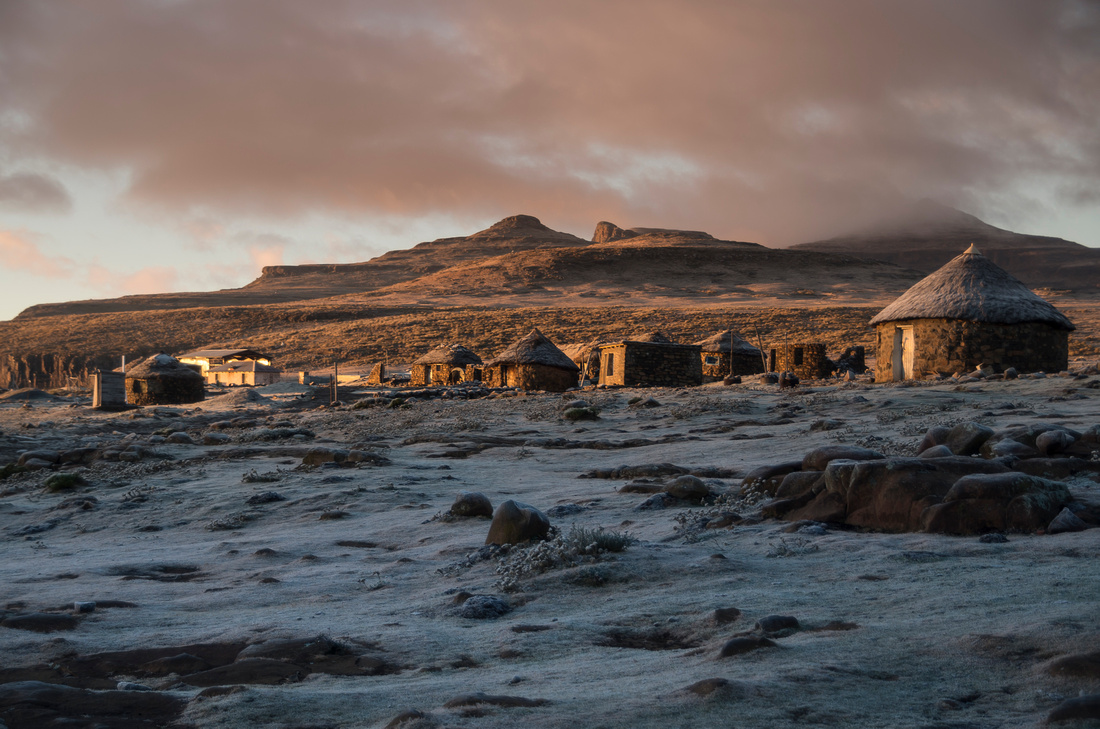 Mokhoro, Sani VillageBuilt of thick layers of stone covered in a mixture of mud and cow dung, these homes are built facing north to harness the sunlight and to avoid the vicious east-west winds

We drive with our young Basotho guide, George, to Mamokae village, the starting point for the climb to the summit of Thabana Ntlenyana (3,482m) which means 'beautiful little mountain'. It has the honour of being the highest summit in Lesotho, and indeed Southern Africa, but it must surely take the prize for having the most unpronounceable name of any mountain. George rolls about with laughter as we try to get our tongues around its Sesotho name, which involves unfamiliar click consonants. At just over 22 km return, the route traverses treeless Afro-Montane grassland and a few river crossings which are only tricky in the rainy season. It is not a technical climb, but it is at altitude.

We walk up a wide, grassy valley for over 4 km before a steep climb brings us to a ridge. From here we descend into another sweeping valley. A second ridge must be surmounted before the final pull up the shoulder of the mountain with its crown of rocks. Up here there is no big game, savannah or tropical forest, but the biggest skies you’ll will ever see and a giddying sense of standing on the roof of the continent. Basotho shepherds wrapped in woollen blankets and shod in white gumboots greet us warmly in rapid Sesotho. This sprung-mattress tundra of unfenced grassland is big sheep country. The silence is broken only by the clanking of sheep bells and the shrill cry of jackal buzzards. Take away the warmth of the African sun and we could have been trekking in the Wicklow Mountains.

With winter approaching, there is fresh snow on the higher slopes but the sun is warm on our backs. After 4 hours we attain the summit. The Zulus call these mountains Quathlamba or ‘The Barrier of Spears’. We understand why as we gaze upon an army of emerald peaks, most over 3,000m, some topped with a pie crust of basaltic rock gleaming with snow. Below us bearded vultures appear and disappear in the thick clouds that are welling up the face of the dramatic Drakensburg Escarpment, and the inky blue ramparts of the mysterious Giant’s Castle (3,315m) seem to float somewhere between earth and sky. Up here we are totally alone without any link to the world below, tiny specks in an uncompromising vertical kingdom. 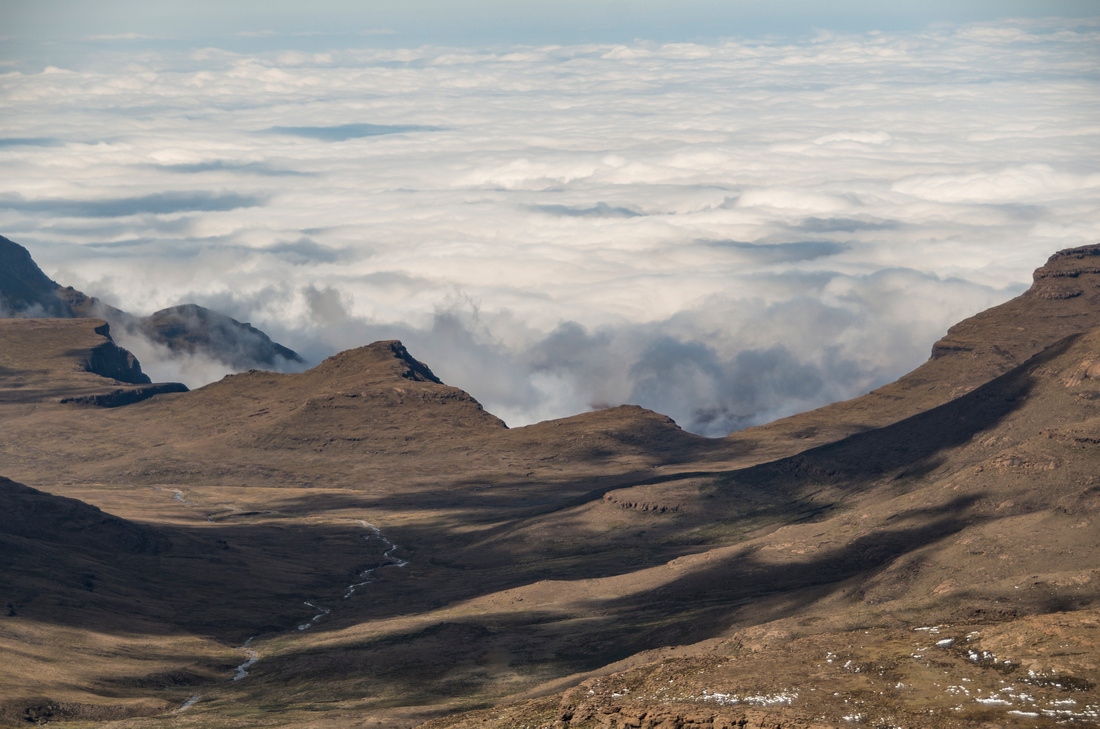 The descent following the same route takes just under 3 hours and we are back in the 'highest pub in Africa' to celebrate over a beer well before sunset. Not bad for a pair of 'golden oldies' according to young George...